The human ego, according to Kabbalah, is probably the least understood phenomenon and yet, it is the most important. Instead of getting into a long dissertation on the dynamics of ego, let’s listen to the voice of ego with the intent to understand the game that it plays.

Everyone loves me.
Everyone hates me.

The human ego lives at BOTH ends of the spectrum.

So, how do we rise above the influences of our ego in order to attain true happiness?

How do we identify and grasp the dynamics of ego?

THE POWER OF RESISTANCE

There have been certain epic moments in history when Kabbalah made a profound shift in terms of understanding its wisdom. The first was Rav Shimon Bar Yochai’s revelation of the Zohar,  the first time Kabbalah was written down in manuscript.

The next major transformational moment came when Kabbalist Rav Isaac Luria deciphered and organized the Zohar some 1500 years after Rav Shimon. Prior to Rav Isaac Luria, there were a few schools of thought on the meaning of Zohar. Thanks to Isaac Luria, a clearer understanding of Kabbalah emerged.

The next earth shattering moment occurred in the 20th century.

Kabbalist Rav Berg gleaned the most stunning concept in all of Kabbalah, which lies at the heart of the creation of our universe and the very meaning of our existence. The Rav revealed a concept that is the most striking in all of human history.

The concept is called Resistance or Restriction.

Both physical and spiritual Light cannot be ignited in this universe without resistance.

Originally, the vessel (we, the souls of humanity) resisted the Light of Paradise that was flowing into us from the Creator. We rejected the Light so that we could have the opportunity to reveal it through our own effort. We wanted to become the cause instead of just an effect.

When the vessel rejected the Light, this brought about the Big Bang creation of space and time, an arena in which we, the souls of humanity, could be the cause of the Light we receive.

The universe resists automatically. As Rav Berg explains, resistance is built into the very fabric of the universe. For example, when sunlight travels through the empty vacuum of space, it’s still pitch black in space, even thought sunlight is present. Why? Sunlight only shines when it strikes a physical object and the object reflects (resists) the beams of light. In the moment of resistance/reflection, sunlight shines.

Space is black because there is no resistance taking place in the vacuum.

Earth is bright because our atmosphere and the physical world, resists the sunlight causing it to shine.

Make sure you grasp this concept well.

We must resist the influences of our ego. Period.

If our ego receives the Light directly, our lives eventually wind up dark and filled with despair, the same way the vacuum of space remains pitch black when it receives the sunlight directly.

Rav Berg explains that when we receive Light directly (otherwise known as ego gratification) the “big bang” replays once again in our lives. This happens automatically. When we receive direct Light (which simply means reacting to anything) the vessel automatically resists the Light because receiving directly violates the very reason for our existence. The original restriction plays out again at some point in the future and THIS is why momentary and immediate and instant gratification lead to future chaos and darkness.

The Light that we were receiving directly is eventually snuffed out. That’s the unbroken law of our universe.

The ego, however,  tricks us by giving us temporary Light. This is the rush and energy we feel when we eat junk food, explode in anger or any other human reaction in which an external situation, be it a person or an event, incites that reaction within us.

But this Light is like a stick of lit dynamite. 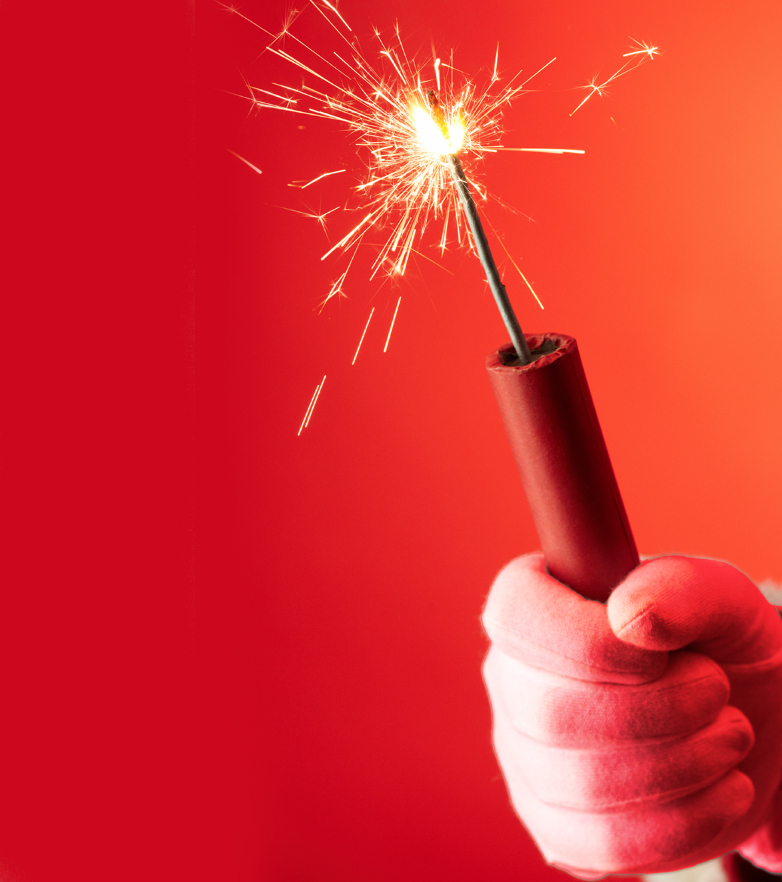 The sparkle of a lit fuse dazzles our eyes. However, those sparkles are on a time limit — the burning wick and fuse. Once that wick is burnt out, there is an explosion in our lives and darkness and pain are the result. Ouch!

This fuse is called time.

This is for free will purposes.

The force called ego, or the Opponent, is handing us sticks of dynamite all day long.

All we need to do is to resist receiving it. But that is easier said than done.

To generate long lasting Light, we must resist direct Light (ego gratification) and then there is momentary pain on the ego, but long term fulfillment and the Light of contentment and good fortune over the long term.

The Rav gave us this power.

So, whether the ego tells you are a genius or a fool, the idea is to resist these impulses and reactive thoughts. Don’t get tripped up wondering how the ego can make you feel superhuman or super lousy. The idea is to focus on reactions.

Let go of all the psychobabble and analytical mumbo jumbo when it comes to human behavior. The only thing we need to know is that we must stop our reactions.

A THEORY OF RELATIVITY

Here we have two opposite proactive behavioral actions but both are based and founded upon resistance. Get it?

The external world around us is merely the trigger to incite reactions so that we have the opportunity to resist and transform.

On another level of understanding,  the reason we are separate from Light is because of our opposite nature. Rav Ashlag teaches us that there is a law of repulsion at work in our world. When two spiritual entities are different from one another, there is a force of repulsion that repels them and creates space. The more dissimilar two entities are, the greater the repulsion and space between them.

The Light is the cause.

We are the effect.

The way home is to emulate and imitate the Light.

What did the Light actually do, when you get to the very essence of creation?

The Light created a vessel, the Desire to Receive the Light.

This, according to the Zohar and all Kabbalists, is the only creation that ever took place. Everything else was already contained within the Light. All the happiness, knowledge, pleasure, joy, etc., already existed, and will always exist, in the realm of Light.

The only thing the Light did not possess was a Desire to Receive.

Because the Light is all.

The Light is everything.

The Light is the totality of reality.

There is no one from whom the Light can receive and there is nothing for the Light to receive because the Light contains All!

So the Light created the vessel, the Desire to Receive from out of nothingness. That’s you and I.

This is the only creation that has ever taken place in history, in this world and in true reality. Everything else is merely a branch emanating from an existence that has been there forever.

When we see a brand new Mercedes Benz, a stunning pair of Ferragamo shoes, an  irresistible buffet of junk food or an extremely attractive person, our ego (desire to receive) is ignited and we want to experience the pleasure. Right now!

The problem is, it means we are still an effect. The Benz, the shoes or the hottie is what activated our desire. The new car is the cause and our desire for it is the effect. The real reason we resist is because now WE become the cause of our desire. If we deny ourselves the instant gratification, our desire for the object is intensified. We become responsible for creating our vessel and desire and now we are exactly like the Light. We created a vessel. Inside of us.

As Kabbalist Rav Berg said, when we see a fashionable article of clothing in Bloomingdales, and we buy it, the garment really bought us. Think about that.

As the Rav explains, the pleasure that fashion apparel brings us already preexisted in the Endless. What didn’t exist was our ability to be the cause of our desire for it.

Reflect upon this well. It’s the key to Kabbalah and a living a life fulfilled and contented (if you have questions, please submit for further clarification).

When we resist the immediate allure of fashion wear, food or anything else outside of us, we create our vessel.

The same way the Light created a Vessel.

This is why we must resist.

We are now identical to the Light.

RESISTING OUR WAY TO REDEMPTION

Each of us, individually, and collectively, came to this world to achieve a certain measure of resistance in the universe  to remove Bread of Shame, which is our desire to become the cause of our own Light and happiness instead of receiving it like a charitable hand out and free lunch.

When the Vessel, originally resisted the Light in the Endless World, causing the Big Bang, 90% of the work was achieved!

The final 10% of resisting the Light was left for the 6000 years of human consciousness history.

Once we achieve a critical mass of resistance against our ego, the Light will go on full force, permanently, for the entire world.

If we keep gratifying our ego, we delay our redemption to the very end of time and then we are forced to achieve it through suffering and pain.

Resistance/Restriction allows us to proactively, and with mercy, achieve our redemption quicker, by resisting the influences of the ego.

Pain and suffering is the reactive way to the redemption.

The tools of Kabbalah give us the power, the strength and foresight to know that the meaning of life is to resist our ego, and to practice it daily.

Kabbalah and restriction gives us the ability to transform from reactive into proactive people, situation by situation.

The ego is the most powerful force on earth.

Without the tools of Kabbalah, there is no way to win this war through a path of mercy and pleasantness.

With out the tool of restriction, and without the Zohar and the path to give us the strength and courage to activate resistance, our world will be forced to change through pain.

Rav Berg gave us the greatest gift in history.

The tool of restriction.

It is the single most powerful technology on earth and we must appreciate the genius of Rav Berg who gave us this power.

Not one Kabbalist in history has made it so simple and profound for people to change their lives and grasp the ultimate meaning of existence.

And the Zohar and the Kabbalah Centre give us the strength to activate resistance.

After all, it’s one thing to know we must resist. It’s another thing to have the courage and strength to actually resist the ego.

Let’s now go back to the very beginning of this article to address the dynamics of ego.

Our reflexive reactions to external events and people.

We are here to resist our reactions.

The moment we resist a reaction, we are proactive.