NASA has just announced that they have found the first earth sized planet capable of sustaining life. , Super Earth—or officially Kepler-186f. Prior to this, they found a “super earth” which was much larger than our planet.

So what’s really happening here? Why is NASA finding all these potential hospitable planets that seem perfect for human life?

Many students of Kabbalah ask about the possibility of life on another planets. And why now, after so many years of space exploration, have they suddenly found these amazing planets with the potential for life?

According to both physics (the Biocentric view) and Kabbalah, the entire universe is merely an illusion that exists inside of our minds. The entire cosmos is a phenomenon that is occurring in our own collective consciousness. Super Earth is really our earth. It’s a glimpse and reflection of our own planet representing the possibility of what our world will become when the so-called “Messiah” arrives and the world is transformed into a reality of true fulfillment, peace and immortal existence. 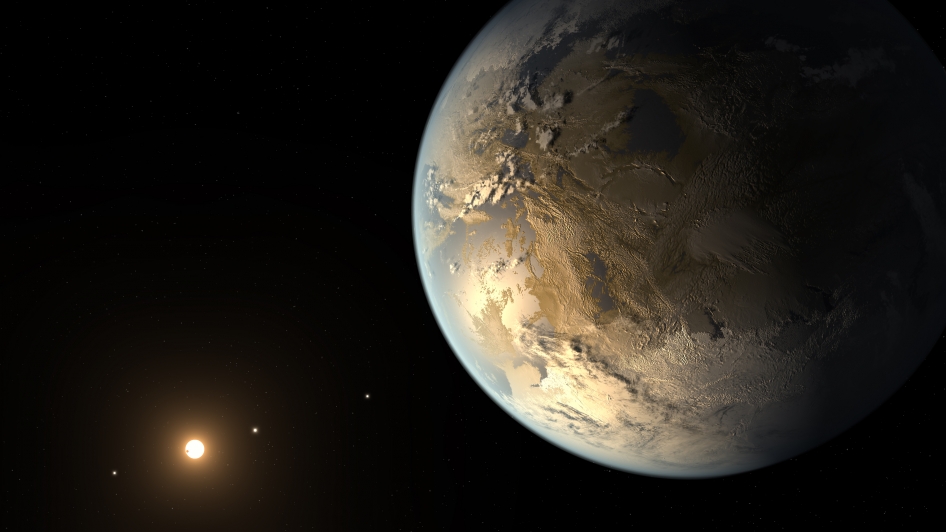 Scientists are merely tapping into the metaphysical state of existence, which is the impending arrival of immortal existence and the world of paradise—our destiny. Kabbalists tell us that science always offers us a physical reflection of that which is taking place in the spiritual realm.

We are close to achieving a world of paradise thanks to the spreading of the Zohar and this is why scientists “suddenly” found Super Earth.

The whole universe is us.

Existing within our own consciousness.

And make no mistake, as the ego is diminished, the whole idea of a super earth or an earth size planet that is perfect for human life and a potential paradise comes closer to becoming our new reality.

And despite what the ego tells us there is nothing really out there. The whole cosmos is a mental projection. All the planets and galaxies are a reflection of the dimensions of consciousness that Kabbalists call the Sephirot. The universe “out there” is a mirror of the inner dimensions, which is the secret of the Zohar’s statement, “as above, so below.

Kabbalah explains that when the new reality arrives our planet will change its physical dimension, enlarging to accommodate the arrival of immortal existence. People will be as healthy and as young as the age of twenty-one, forever.

The borders of the Land of Israel will extend to include the entire planet and all people. However, the Messiah arrives only when individual people achieve a personal state of Messiah within themselves. Once a critical mass and specific threshold of people achieve this personal, individual state, only then will the global Messiah appear as a seal, not a savior. The Messiah is a seal that confirms that we, the  people, have achieved true transformation of our own nature, and in turn, our planet.

After this state of Messiah is achieved, there will be one thousand years of paradise on earth, according to Kabbalah. The reason for this is because the soul, our true self, could never have achieved transformation without the assistance of the body.

But in a physical reality, you can attach both the sharing positive force (+) and the negative receiving force(-) to a physical entity; the same way a battery and a magnet contain two opposite charges. The body, therefore, allows us to transform our negative charge (the ego) into a positive charge by our difficult actions of sharing and by diminishing the ego’s selfish desire and transforming it into a sharing power.

Once this transformation is complete, the ego becomes a sharing force, identical to the Light. Now both can co-exist in the spiritual realm, forever.

That’s the secret. That is the true Super Earth.

It is a realm where everyone channels all the pleasure, knowledge and joys of life, which include the world of art, culture, technology etc., for the sake of sharing with others—instead of for personal selfish gain.

It is the body that allows us to achieve this dramatic and brilliant change and thus the body receives a reward of a thousand years of bliss beyond our imagining. If we’re greedy enough and astute, we can how understand that true sharing pays great dividends. Only the ego tricks us into believing that selfishness is a good thing. Selfishness, in fact, brings only temporary pleasure at the price of inevitable death. What a lousy proposition and business deal.

Endless sharing, on the other hand, and being the cause of another person’s happiness is what brings immortal existence and a new Super Earth that will overflow with delight and pleasure beyond our current understanding.

After this period of one thousand years, all souls will then return to the realm of the Endless, a state of pure consciousness that is far more real and authentic then this physical reality. Of course, we cannot envision or imagine that right now. Nonetheless, that’s what’s in store for mankind, according to the Zohar.

NASA finding a Super Earth, and now, another earth size planet capable of hosting life, is a sign that we have moved that much closer.

The chaos in the world, the violence, negativity, famines, disease, genocides, conflicts, natural disasters are another sign that we are closer. The Zohar says chaos and blessings will exist side-by-side in the End of Days just before the arrival of immortality, Messiah and world peace.

If we embrace the Zohar, the Zohar promises we will be on the side of blessings for the Zohar is the ark of our generation and the Tree of Life, where no darkness or chaos can penetrate.