Not too long ago, I was learning with Kabbalist Rav Berg at his home. We discussed the most important number in all of physics.

137 is the biggest mystery and most important number  in all of science. Without question.

137 refers to electrons and the odds of an electron absorbing a single photon. Or in simple Kabbalah language, it’s about Vessel and Light, or the physical body of man and his ability to ignite the Light from his soul and arouse the Light in the extraordinary  99% reality so that it shines in our plain, ordinary world.

Please do not worry if you don’t understand the science and physics associated with the number 137 (also known as the fine structure constant). That’s not what is important in this article. And by the way, most physicists don’t understand it either. But they do admit and know that it’s the most important number in the universe.You can google it later if you want to know more about how it works in physics and why it’s so important.

In this article, I will offer up the simple, bottom line connection to this mysterious number, a number that has the greatest physicists in history scratching their collective heads.

For instance, one of the important physicists of the 20th century Richard Feynman wrote the following about the number 137:

“It has been a mystery ever since it was discovered more than fifty years ago, and all good theoretical physicists put this number up on their wall and worry about it. It’s one of the greatest damn mysteries of physics: a magic number that comes to us with no understanding by man. You might say the ‘hand of God’ wrote that number, and ‘we don’t know how He pushed his pencil.”

Another great 20th century scientist, Wolfgang Pauli was obsessed about 137. Pauli and other physicists were convinced that 137 was a mystical number with a secret meaning beyond physics. According to the science book Deciphering the Cosmic Number, by Arthur Miller:

“Pauli once said that if the Lord allowed him to ask anything he wanted, his first question would be “Why 1/137?”

In this same book, it reveals the following letter that Wolfgang Pauli wrote to his sister Hertha:

“I do believe that the natural sciences will…bring forth a counter pole in their adherents, which connects with the old mystic elements”

Guess what the great physicist and genius Wolfgang Pauli discovered: He was shocked to learn that the numerical value of KABBALAH was 137! Pauli studied Kabbalah in the hopes of finding a solution. His problem was that he did not study with a Kabbalist. He studied with a scholar and was thus unable to crack the code.

Wolfgang Pauli also died in Room 137 of the Rotkreuz hospital in Zürich, Switzerland.

Anyway,when I was learning with the Rav, the Rav acknowledged that there was a profound message behind that fact that the one magic number of physics is the exact same numerical value as the word Kabbalah.

First we learned that the angel Yofiel, known as the “Angel Prince of Torah” as mentioned in the Zohar, has the same numerical value of 137! Guess what this particular angel taught Moses?

The angel called Yofiel taught Moses the mysteries of Kabbalah! Yet another connection between 137 and Kabbalah!

The number 137 comes up quite often in the Torah. It is the most common age for the biblical characters.

Abraham is 137 years old when he binds his son Isaac in the Torah Portion of Vayeira. When you understand Kabbalah, you realize this relates directly to the idea of an “electron absorbing a photon” or desire connecting to Light. We must bind our ego (Isaac), the negative desire in order to connect to the hidden, concealed realm of Light (Abraham). That’s what the story of Abraham binding his son Isaac is all about.

Moses’ father lived to 137, according to the Torah.

Ishmael lived to 137, according to the Torah.

Levi lived to 137, according to the Torah. Levi is the seed of the Tribe of Levi.

What is also amazing is that the phrase “The Cohen & the Levites” has the numerical value of 137.

Then the Rav explained that 137 is the 33rd prime number. Why 33? The Rav said “the number 33 lives on and on and on.” Sure enough, 33 is the day Rav Shimon left this world, the holiday known as  Lag B’omer. This is the one day when all the Light of Zohar and Kabbalah are revealed into the physical world, or the electron absorbs the photon.

The 33rd day of Omer is the day Rabbi Akiva taught Rav Shimon the Kabbalah.

The 33rd day of the Omer is also the day when Rav Shimon left the cave after 13 years of learning.

The Kabbalists say the day Rav Shimon left the cave is equal to the full revelation of Light on Mount Sinai with Moses. So 137 — by way of 33 — also connects to Kabbalah in a profound way. Our purpose in this world is to unite the physical world (electron) with the spiritual world of Light (photon) and that is what Kabbalah (137) teaches us to do.

33 is the highest degree in Scottish Rite Freemasonry, which is based solely on Kabbalah.

33 is the age that Kabbalist Yehoshua ben Yoseph (Jesus) left this world.

The seen force is our desire, the realm of the physical world which we call the 1 percent reality. The unseen realm is the source of wisdom and happiness. The hidden 99% reality. 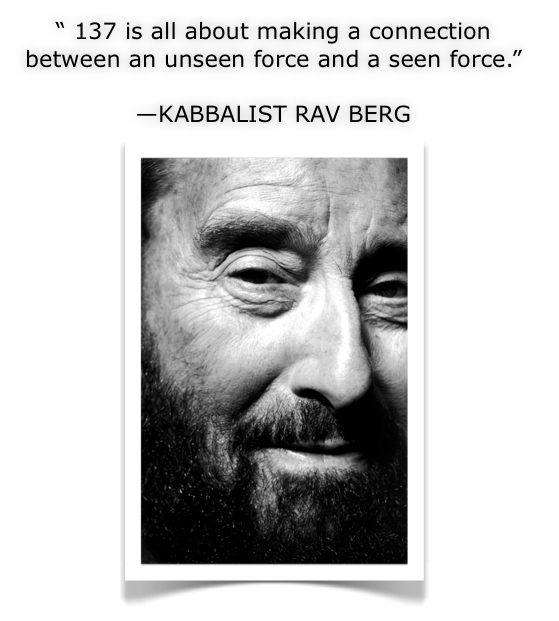 The Rav then said the following:

“If you add the individual numbers of 137 together you get eleven. A very powerful number in the Zohar. In warfare, using the weapons known by the Hebrew word Korbanot (or sacrifices) the other side (evil) brought ten items and the Israelites brought eleven. The other side (evil) knew ten was part of this physical reality, to control it. But the Israelites knew ten was not ultimate but rather eleven was. Eleven is part of the eleven spices spoke of in the Torah and Zohar. And all the activities of the morning connection (morning prayers) add up to eleven. Eleven is a good number. Two times eleven is 22, the number of letters in aleph bet. Three times 11 is 33, Rabbi Shimon and Lag B’Omer.”

The Rav stopped talking for a few minutes on this subject. Then, after a short while, the Rav returned to it.

“Why is eleven chosen as good number?” the Rav asked. “Ten (sephirot) is limiting because even in the realm of the ein sof (Endless World, the realm above our physical world) we are not dealing with the ultimate Light. So eleven is higher than ten”

I asked the Rav to explain why the Endless World (Ein Sof) was not the ultimate.

The Rav  said the following:

“Eleven is higher than ten. In the Endless World there is Light and Vessel. Which means there is still a vessel. But then there is the unknowable Source of the Light, the source behind the emanation of the Endless World, which the Zohar will not deal with. Kabbalah only deals with the Light that shines outward, not the source of the Light.The Source is beyond human intellect and can never be grasped so it is higher.”

The Rav then summarized the whole 137-Kabbalah concept:

“The whole process of life is about one thing—desire — the desire to receive the Light, which is why they call this Kabbalah — Kabbalah means to receive. The engine behind all activity on earth,all human action is desire, a craving for Light. There is war, conflict and human misery only because we have not fulfilled that one desire. That is the only reason.”

“I used to teach this long ago in the basic course. I think we took it out. In electricity, there is 110 volts and  there is 220 volts. But both use the same force of electricity. It is the capacity of the equipment that you plug into the electrical force that determines if its 110 or 220. But the electrical force is always the same. There is only desire to receive consciousness. The different particles are just different vessels with different capacities, but its all one singular force of consciousness. How that one force is used and received is what makes the difference and accounts for all the diversity. Our desire to receive can no longer continue to operate as it has in the past (selfish). We must change and start receiving for the sake of benefiting others.”

The number 137 in physics corresponds to the interaction between an electron and a photon or the probability of an electron absorbing a photon. In the language of Kabbalah, it means the interaction between the Vessel and the Light or how a Vessel can absorb/receive the Light. We know that we are distanced and disconnected from the Light when we are opposite in nature because in the realm of consciousness or spirituality, opposites repel. The only way for our physical world (electron) to absorb (receive) the Light is to imitate the Light, behave like the Light, and that stops repulsion. In turn, it causes attraction.

The missing puzzle piece for physics is consciousness.

Only by way of consciousness can we absorb and connect to the Light in a lasting and permanent way.

When we first admit and recognize that our ego is a distinct and separate force of consciousness (often that takes lifetimes), and then we strive to remove it, so that we share, instead of only receive, we then unite with the Light. In other words, the Light is the Cause of Happiness. Therefore, when we become the cause of someone else’s happiness, we are identical to the Light.

What’s the take away lesson here?

That is the long-held secret.

That’s the formula for immortality and paradise.

When we are all working to make each other’s dreams come true, using our gifts and talents for the sole purpose of causing happiness in others, all ten dimensions of the ten sephirot align and connect. Suddenly, the Endless World and the Physical world unite as one.

The 1 realm of the Light connects to the 3 upper Sephirot, which connect with the lower 7 Sephirot and suddenly Light flows.

Now throw away all the details and physics and just realize when you love your neighbor, you change your life and this world. But also know that you can only love your neighbor when you remove the one force that prevents you from loving unconditionally — the human ego.

And the ultimate secret for changing everything.